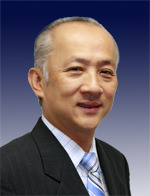 Mr. Vincent Chong is the Managing Director of QuestMark Capital Management Sdn Bhd. He is also the Managing Director of QuestMark Asia Limited, a company established to provide business advisory and consulting services to its clients, particularly in China–related transactions. Mr. Chong is a British educated and trained Chartered Accountant with 20 years’ experience in the auditing and corporate finance business. He has extensive experience in financial analysis and corporate finance assignments. During his 10 years’ tenure with a London based and listed financial services group (the “Group”), he participated in several merger and acquisition transactions including spending 18 months in New York as the Finance Director responsible for the Group’s post-merger integration activities.

Prior to establishing QuestMark Asia in January 2006, Mr. Chong was the Managing Director of a leading international valuation group whose responsibilities included development of the business valuation division. Mr. Chong has participated as Independent Valuer to numerous IPO’s and restructuring assignments including China-based enterprises.

Mr. Chong is also an active supporter of several charitable entities including the Chi Heng Foundation and was the President of Lions Club of Tsing Ma, Hong Kong from 2008-2009. Mr. Chong is now an Honorary Member of the Hong Kong Baptist University Court.