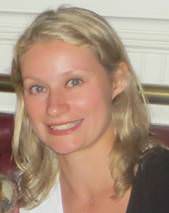 Alexandra is a member of the Advisory Board of QuestMark Group.

Alexandra Cahill has over 15 years of experience in various roles within the Financial Services, Tech and Media industries.

Alexandra is currently working as a Senior Product Manager in the Digital Innovation Lab of Capital One. In this position she leverages big data and customer insights to re-envision how people interact with their money across all digital platforms. Previously, Alexandra worked as Product Manager at the tech start-up Bundle.com which was acquired by Capital One in 2012.

Alexandra has also spent time at other top financial institutions. Immediately out of MIT, she joined the Analyst program at Bank of America in the Capital Markets group focusing on Fixed Income, Sales & Trading. Later she was Associate Director of the Financial Services group at Standard & Poor's Vista Research where she was responsible for providing primary research to institutional investors.

Additionally Alexandra worked in Investor Relations at a local NYC restaurant magazine and in Search Marketing at an online advertising agency. She also interned for Warner Brothers in Film Publicity, ABC at the TV show "The View," CBS News Productions and Hillary Clinton's 2000 Senate campaign.

Alexandra Cahill grew up in Manhasset, NY, a suburb of NYC. She has been living in NYC since graduating from MIT in 2001 where she is involved in various charitable organizations and community groups.

As part of her corporate social responsibility, Alexandra volunteers as an MIT Educational Counsellor helping to recruit, select and enrol MIT undergraduates through interviews, written reports and receptions. Alexandra also has experience in mentoring & guiding overseas students in studying, living and working in NY on general matters.

Alexandra Cahill graduated from Massachusetts Institute of Technology (MIT) with a BS in Political Science and concentration in Economics.